The purity squads have their tiny knives out for the BMW Mini Countryman, and who can blame them? A 3,200-pound, four-door, all-wheel-drive Mini as big as a Nissan Juke and as potentially as spendy as a BMW 3-series, pushing $40,000? Why, it's ridiculous, it's absurd. You might as well suggest a Ferrari four-wheel-drive station wagon.

Oh dear Lord. When did that happen?

For many Mini brand apostles, insert dismay here. And it's not even a question of whether BMW and its wee Anglo-Saxon thralls in Gaydon, England, can engineer an entertaining small car with all-wheel drive. Clearly, it's within their compass to do so, and with the Countryman, they have. Here is as lively, vital and tossable a sedan as ever resembled an orthotic shoe. 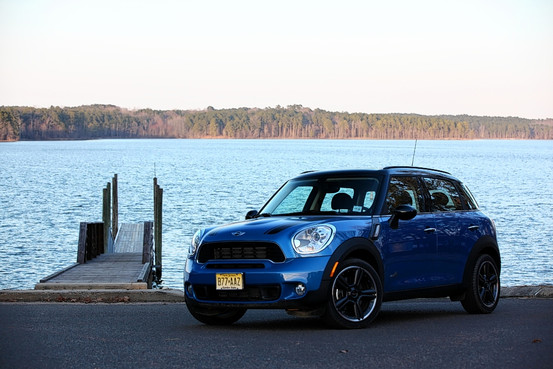 This is as lively, vital and tossable a sedan as ever resembled an orthotic shoe, but you just can't be a big Mini.

Nor should we doubt that the brand's troupe of design-school savants—you will know them by their complicated German eyeglasses—can style a cool and charismatic interior. Again, they have. The Countryman's spacious rear cabin is masterfully packaged, with two slide-and-recline bucket seats separated by a novel accessory rail that runs the length of the cabin. Owners can personalize the cabin by situating detachable accessories such cupholders, iPod docks, eyeglass cases and elbow rests where they like them along the rail. Brilliant. Only downside: Big dogs can't climb in the back seat. A bench-seat option is coming.

And, obviously, Mini's exterior design language is epic, one of the most successful car designs in the past 25 years: Square-stanced, bright-eyed and pugnacious, a barking terrier of a car that wants to shake the road by the scruff. Perfect is not too strong.

The Countryman debuts some tasteful updates to the styling language—the strake at the front fender, the turned-down corners of the of the grille—but at a glance, the Countryman looks like a Mini Cooper S that was Xeroxed at 130%. Considering the car is 6 inches longer than the plus-size Mini Clubman, as well as 4.1 inches wider and a towering 5.1 inches taller, that's some clever styling. The Countryman could easily have turned out to look awful, the Clubman's bloated corpse.

So, no, the question isn't, "could they?" It's "should they?" And here, join with me in a brief fantasy as we imagine the BMW board in Munich wrestling with the question of what, precisely, is a Mini? It's a small car, right? All agreed? (Handsome executives nod solemnly and stroke the white Persian cats sitting in their laps—Ja! Sehr kleine.) Indeed, whatever a Mini is, its appeal is leveraged precisely on the very fulcrum of its smallness. It defines itself: Mini. A Mini is a car that is bandy, diminutive and urbane, which is to say, good on gas and easy to park. A Mini is a car that is darty, maneuverable, fun, quick, a twinkle-toed halfling dancing among the golems of the road. Mini is a design-forward, fun and premium brand delivered in a subcompact size.

Then Klaus from marketing pipes in: But we could sell a few thousand more cars if we just made them bigger.

Silence. Was? And then: Ein grosser Mini! Wunderbar!

At the risk of being puritanical, it seems to me that sometimes car companies have to walk away from the short-term expedience of a few thousand sales, or even a few tens of thousands of sales, to protect the meaning, the truth, the inner logic of a brand. Mini has spent years selling itself as automotive counterprogramming, and now it's acting like every other car maker with white space to fill. But if any brand is hidebound, it's Mini. Even Aristotle says so. The first rule of reasoning is the rule of noncontradiction: "The same attribute cannot at the same time belong and not belong to the same subject in the same respect." In other words, you can't be a big Mini.

I understand. It's hard to resist. Brand is something soft and squishy and metaphorical; whereas shareholders are all too real. And I have no doubt BMW-Mini can deposit a truckload of data in my yard to document the existence of unrequited customers who love Mini but need a bigger vehicle—even bigger than the three-door Clubman, which, full disclosure, I love.

Not only that, but by moving up in size, the Countryman now finds itself in door-to-door comparisons with some pretty accomplished compact SUVs, including the Volkswagen Tiguan (AWD and about 25% more cargo space for less money) and the weird but oddly wonderful Nissan Juke, which goes like the very stink of Hell. The Countryman is going to get bloodied up a bit in those street fights.

Worst of all, the Countryman trades away a degree of Mini's inimitable driving character for a mere four doors and cargo space. Hey, I can get four slammers and a boot anywhere. What I can't get is a car that drives like it wants to be snorted through a rolled-up C-note.

Our test car was a Cooper S Countryman ALL4, meaning it had the turbo'ed 1.6-liter with BMW's Valvetronic head (181 horsepower and 177 pound-feet of torque, or 192 torques in Sport mode). With a six-speed manual transmission, it's certainly not slow—0-60 miles per hour in less than 8 seconds—and with max torque available at just about any engine speed, the Countryman pulls hard in the lower gears, and yet it feels burdened by the extra weight. At highway speeds the weight (3,200 pounds with AWD) and aero drag hang on it like linebackers trying to keep it out of the end zone.

And when the road goes twisty, the Countryman can come unstuck in ways that are positively un-Mini. The steering is still nicely reactive (the rack ratio tightens up in Sport mode) but sudden steering inputs provoke a surprising amount of body roll—again, for a Mini. The Countryman's weight and higher center of gravity is simply beyond the suspension's power to contain in abrupt cornering. The nose pitches, the chassis lolls and the front end starts to wash out.

If you pick up the throttle just right, the new AWD system will direct chassis-balancing torque to the rear tires and help to null out some of the understeer. But it's just not the same. At times the Countryman behaves like one of those playground rocking horses mounted on a bendy old truck spring.

My dissatisfaction is a sort of tribute. So distinctive and memorable is driving experience of the smaller Cooper S—nutty, fervid, kart-like—that anything less feels like a betrayal. Yes, a lot of buyers won't have the calipers required to measure the difference. Many will love the ease of four doors, the roominess of the rear cabin and the tractive security of AWD. No sense in denying Mini-philes in the Snowbelt, right?

Still, it just doesn't work for me. With the Countryman, tiny sharks have been jumped.