MINI CLUBMAN: A Car for a $4-a-Gallon Season

It's easy to see why car makers are facing what's shaping up as the worst sales year in over a decade. Few truly good models get outstanding fuel economy (which I reckon at more than 30 miles per gallon in combined city/highway driving). High gas prices caught most manufacturers unprepared, and even Toyota reported a double-digit sales decline for June. With little to choose from, people are living with what they have, waiting to see if gas prices go down or for a car maker to come up with a Big Idea -- the next Prius, so to speak. 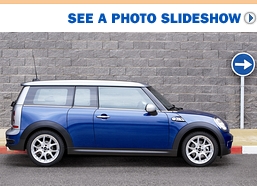 While we hold our breath, the cure for the common car may not be so elusive. In fact, the new 2008 Mini Cooper Clubman has the potential to be just the thing for this $4-per-gallon summer, thanks to an EPA combined rating of 32 miles per gallon. And I'll do that one better: Without even trying I got an average of 36 miles per gallon during roughly 500 miles of test driving. When I slowed down to 55-65 miles per hour, over a 100-mile freeway stretch, the Clubman even managed to return 48 miles per gallon. That's better-than-hybrid fuel economy. And no, this car is not a hybrid.

The MINI Clubman is the latest derivative of the "new" Mini, the diminutive roller skate that parent BMW relaunched in the U.S. for the 2002 model year and redesigned last year. The regular Mini's size makes it a niche vehicle, so a bigger MINI Clubman is an attempt to make the Mini more palatable to the mainstream. With a stretched wheelbase (the distance between the front and back wheels) and a corresponding 9-inch increase in length, the Clubman adds four cubic feet of space for passengers and nearly that much more for cargo. This makes the car even longer than the subcompact Toyota Yaris hatchback, though not quite as roomy inside.

Still, you can accommodate actual persons in the back seat of the Clubman, an impossibility in the regular Mini Cooper. Climbing in and out has been made much easier thanks to a rear door on the passenger side (there's none on the driver's side), hinged at the rear in a fashion known to car fans as a "suicide door." This extra door isn't novel -- GM's Saturn coupes had them a decade ago -- but works well here, improving usability while allowing the Clubman to retain the Mini Cooper hardtop's lines and distinctive look.

This retro style has made the Mini a success, and BMW has been careful not to stray too far from the aesthetic. (BMW has even given the Clubman, instead of the usual hatchback, a pair of split doors on the rear end to be used for loading, harkening back to a 1960s-era variant of the original Mini.) While the Clubman looks great, the envelope could have been pushed a little more -- quite literally. The car is still too small to accommodate even a three-person family on a weekend trip. A regular-sized cooler takes up nearly the entire cargo area, and with a kid or two in the back there's just no room to safely pack your gear. Had the designers extended the rear overhang a bit more, the Clubman might not have looked quite as sharp but certainly would have swallowed more luggage.

The regular Mini Cooper lends considerably more to the Clubman than its style: Everything from its 1.6-liter four-cylinder engine to the oversized gauges and toggle switches that adorn its dashboard are present and accounted for. That's a good thing. The Clubman feels and drives like a Mini in every way, which means it's sporty and fun, but has a tendency to ride rough over expansion joints on the highway. Rearward visibility suffers just as much, if not more, than in the shorter car, due to the split rear window. (The Clubman's improved compatibility with backseat passengers means you may never notice the split, as their heads will entirely block the view anyway.) As with the rest of the Mini lineup, premium gasoline is recommended, a glaring indication that BMW never intended the Clubman's fuel economy to be as relevant as its cheekiness.

But mileage is bound to be a big part of the lure of this new model, even as its $20,600 base price makes it considerably more expensive than the econoboxes that typically return 30-plus mpgs. I won't say that the Clubman is a better car than the exceptional Honda Fit, a model that for my money is the best thing going right now, but Minis are certainly a cut above that whole class of cheap, small cars in terms of amenities and equipment.

This makes the MINI Cooper Clubman an attractive alternative for people who can't do without things like heated seats and automatic climate-control systems. It's unfortunate, however, that BMW is so wedded to this notion that the Mini line has to be "premium" in both content and price, because I'd like to see this little runabout stripped down into an even thriftier package. BMW sells a version of the Mini in Europe that has a slightly smaller engine, and that combined with a little less equipment to reduce weight could potentially net a few extra miles per gallon.

Very soon, people may even be willing to pay more for such a car.