Half a Loaf, for a Mini Appetite 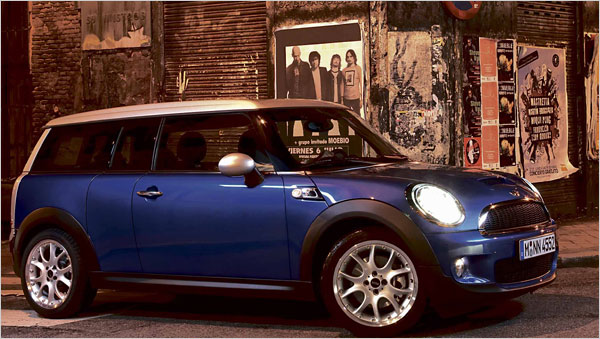 The latest variation of the Mini Cooper is the Clubman miniwagon, which evokes the Mini Traveller and Countryman of the 1960s.

PLENTY of people have come this close to buying the sprightly, nano-scale Mini Cooper. And then they got a load of that back seat.

The Clubman offers bold styling but falls short in some of the details.

If you were taller than, say, a garden gnome, it was best to limit that assessment to a peek through the glass and a low whistle of skepticism. Lured into the rear’s confining web, you’d find yourself squeaking “Help me” like the man-bug at the end of “The Fly.”

For Mini, the renowned British brand revived by BMW, a larger model has long been part of the planned second act. Yet Mini couldn’t sell out, offer a spacious family room on wheels (the MiniPad?) and keep a straight face.

The safe middle ground is the Mini Clubman. As clubs go, it’s still intimate, only 9.5 inches longer than the standard Mini, with a three-inch edge in wheelbase. The Clubman is identically jazzy inside, with the sleek surfaces and decorative flourishes that drew so many buyers to the original. Engines, transmissions and other essentials are also familiar items from the Mini menu.

What the Clubman adds is space, with the modest addition of 2.5 inches of knee room in back and 50 percent more cargo space behind the rear seat. The cargo area is accessed through a pair of “barn doors” — think ’70s party van — that, like some other Mini touches, seem more indulgent than intelligent.

The Clubman’s other bonus door is its ace in the hole, literally opening the car to buyers in search of larger digs. A single rear-hinged clamshell portal on the right side opens in tandem with the front passenger door, creating a reasonable entrance to the back where none existed before.

In my baby-choked Brooklyn neighborhood, Cobble Hill, I see regular Minis with child seats wedged in back, and I wonder: who are these people, and what horrors would an MRI of their spines reveal? In these parked Minis, the front passenger seatback is reliably flipped forward, in mute acknowledgment of the Sisyphean task of baby installation and removal.

The Clubman seems aimed as squarely at parents as sippy cups. And since my wife has declared our 16-month-old daughter off limits for top-speed tests, I put Bianca to use by inserting her through the open-sesame side door and into her child seat — a no-strain affair.

While the back seat remains far smaller than that of a Honda Civic or other compact, it is now more usable for a toddler or limber teenager. Taller passengers will still demand a more socialist distribution of resources, with front occupants sliding forward.

As with its smaller partner, the Clubman blends inspiration and annoyance. The seats are terrific and the materials are first-rate. The Mini also delivers the safety features and optional amenities of, well, a BMW.

It takes design risks — aircraft-style toggle switches, door pulls that seem borrowed from a funhouse ride — that Toyota wouldn’t dare. But the clock-sized center speedometer is so tackily oversize that Flavor Flav might be offended. Audio controls are so enamored with their own looks that they can’t be bothered to work effectively.

The swingin’ saloon doors at the rear, a nod to the Mini Countryman and Traveller of the ’60s, distinguish the stretch Mini from its sibling. They look cool at first, with jigsaw-like cutouts that wrap around the taillights; there is a tiny wiper for each door. Fold the seats, and the Clubman’s much larger hatch and low, fully flat load floor give it a notable edge.

But the opening, unlike a delivery van’s, isn’t large enough to provide a valid reason to open just one of the two doors; a liftgate would work just fine.

A liftgate would also keep rain from falling into the forward-angled hatch when the doors are open. And even with their supporting gas struts, I thought the Mini’s tiny swingers felt a bit tinny — this in a car that’s already notorious for squeaks and rattles. Ultimately, the double doors seem to be another instance of Mini preferring form to function.

The added length also detracts a bit from the regular Mini’s excellent proportions. In aesthetic terms, it’s like taking a perfect cupcake and shaping it into a loaf. And the contrasting-color rear roof pillars, available only in black or silver, seem to clash with some of the available exterior paints.

If the Clubman gives up some style, it loses next to nothing in performance and economy. The Clubman treatment adds 180 pounds, for a total of 2,855 with the six-speed manual. A six-speed automatic is an option.

The Mini Clubman is only 9.5 inches longer than the standard Mini, with a three-inch edge in wheelbase.

The Clubman’s two engines, first used on the redesigned ’07 car, are big upgrades over those in the first Minis by BMW. A base 1.6-liter 4-cylinder delivers 118 horsepower, with the Clubman S adding a turbocharged boost for 172 horsepower.

Never assume, as some do, that the Mini is just a cute economy mouse. On the road, it’s more like a razor-clawed rat, especially with the turbo engine and optional sport suspension with grippy 17-inch wheels.

With its distinguished rally-racing history, the Mini is born for twisty roads, where it feels alive, edgy and high in testosterone. Especially in tighter quarters, the Mini can bob, feint and counterpunch its way to an upset over weightier, stronger competition.

That turbocharged engine can produce modest torque steer, twisting the wheel in the driver’s hands when you tromp the gas at lower speeds. While the Clubman’s rack-and-pinion steering is electrically assisted, it avoids the synthetic feel of many other electric systems. The steering is also bullet-quick, but on rough pavement the Mini can feel twitchy compared with, say, a Volkswagen GTI.

Whichever model or transmission you choose, the Clubman matches the fuel economy ratings of the smaller Mini, which range from 23/32 m.p.g. for the automatic-transmission Cooper S to a stellar 28/37 m.p.g. for manual-shifting base models.

In addition, scanning the voluminous options list is like wandering into Bergdorf Goodman; if you combine an eye for style with shopaholic tendencies, you’ll quickly max out the credit card. (I would consider treating myself to the wood steering wheel).

With options including the sport package, metallic paint and leather-and-cloth seats, the Clubman checked out at $29,700, even without a multitude of extras. A higher-performance limited-edition model, the 208-horse John Cooper Works Clubman, comes this summer starting at $31,450.

But if the urban hipsters who’ve adopted the Mini can afford $300 dinners and $3,000-a-month apartments, they can handle a $30,000 subcompact. Especially one that can swallow a designer stroller and its squirmy cargo, too.