The iconic rally car celebrates its Golden Anniversary this summer. Here's where it's been--and where it's headed. 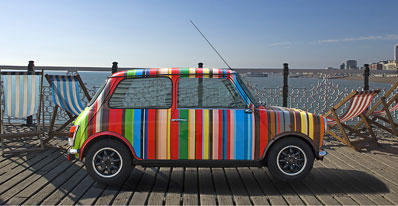 In Depth: 50 Years Of Mini Love

Craig House is one loyal car enthusiast. He put a deposit on aMINI Cooper S two years before the car hit showrooms. At the time, House hadn't even seen what the car looked like--this was in 2000, well before BMW debuted the redesigned classic. But the possibility that he might not like the car never crossed his mind.

"I didn't know what it was going to look like, but we're big BMW people too, and with this new design I just thought, 'These guys are probably going to come up with something that is pretty darn slick,'" says the 62-year-old president of the Oregon Mini Society.

That kind of devotion is normal--even predictable--among the 300 Mini clubs worldwide. Just a handful of cars have production runs, in some form or another, that last 50 years. And although the original Mini cars are no longer produced, the iconic brand still drives enthusiasts to extreme displays of adoration and loyalty.

In Depth: Mini's Milestones Over 50 Years

Some acolytes remain fiercely devoted to the classic Mini, coddling the cars with the hyper-attentiveness of a first-time parent. Others, including Grammy-winning rapper T-Pain, have an almost-compulsive proclivity for individualizing the so-called "neo-MINIs," modifying them with everything from custom wheels and hydraulics to graphics that match their tattoos. In May, more than 25,000 fans from 80 countries gathered in Silverstone, England, to celebrate the car's 50th birthday.

Mini Revolution
On the eve of its golden anniversary (the first unit rolled off the line in Oxford on Aug. 26, 1959), Mini stands as one of the few brands not completely subsumed by a U.S. car market down 35% this year. MINI sales are down 20% year-to-date--bad, but not as bad as overall BMW sales (down 27.5%).

Experts credit the brand's staying power to its affable aesthetics, innovative design and race-ready performance. (Owners say classic Minis can be "fidgety" to maintain, however, and the MINI brand ranked last of all sold in the U.S. on J.D. Power and Associates' 2009 Initial Quality Study.)

"The quality and reliability is not that strong, but the design and the way the car drives and just the feel of the interior, that goes a long way to selling a lot of MINIs," says David Sargent, vice president of automotive research at J.D. Power.

The classic version of the Mini, which ended production in 2000, was created by Alec Issigonis, an idiosyncratic Turkish-born Brit charged by Morris Motors to develop a competitor to the French- and German-made fuel-sippers that emerged during the Suez Crisis, when Egypt nationalized the Suez Canal and interrupted British fuel supplies in the region.

Morris head Lord Nuffield wanted an inexpensive "saloon" that could comfortably fit four adults, so Issigonis developed the first mass-produced transverse engine and pushed the car's 10'' wheels to its corners in order to free up space inside the cabin. His cars were called Morris Mini Minors and Austin Sevens (Morris Motors merged with the Austin Motor Company in 1952 to create the British Motor Corporation).

It took British racing legend John Cooper who, with his father, founded Cooper Car Company, to popularize the cars. He decided that with some engine improvements, wider tires and a distinctive top, the cars could race. Cooper was right: The Mini beat Maserati, Ferrari and Lotus, among others, with three wins at the Monte Carlo Rally between 1958 and 1962. After that, they started being known simply as "Minis."

Racing was just the half of it, though. George Harrison and Steve McQueen drove Minis, and Mary Quant, a fixture in London fashion and pop culture, named her controversial skirt after her favorite car, the Mini.

"A lot of people during the swinging '60s really found them a wonderful statement," says Jim McDowell, vice president of MINI USA. "Sure, they could have afforded a Jaguar or a Rolls-Royce ( RYCEY.PK - news - people ), but they wanted to be seen in a Mini. It was an absolutely purposeful understatement for many of the trendsetters in the U.K. in particular, but in Europe in general."

Mod(ern) MINI
The classic Mini is Britain's best-selling car ever, with 5.3 million units sold globally between 1959 and 2000. But it had little success in America, selling just 10,000 units between 1960 and 1967, when the U.S. government imposed stricter safety and emission standards.

McDowell says maintaining a connection to the brand's British heritage was crucial after Munich-based BMW divested itself of Mini's British parent company, Rover, in 2000. But in order to succeed in the American market, the cars needed an update; while most vehicles are overhauled every seven years or so, Mini underwent only minor changes during its entire production run.

BMW engineers focused on keeping trademarks like the happy-face grill, round headlights, flat top and contrasting paint job while amping up the horsepower, technology and interior trappings, not to mention enhancing exterior curves, McDowell says.

The new MINI Cooper (denoted in all caps to distinguish it from the classic version) is not without its critics. Purists resent anything but the original cars; others say the $19,200 Cooper is so quirky that it's disconcerting (the huge round odometer placed in the middle of the dash and uniquely placed window controls take some getting used to).

However, further digressions from the base model and high-performance variants (the MINI Cooper S and MINI John Cooper Works), like the $20,850 MINI Cooper Clubman and $24,550 MINI Cooper Convertible, have met popular and critical acclaim, for the most part. The new line has devoted followers much for the same reasons as the original Mini: good fuel efficiency (28 mpg in the city and 37 mpg on the highway), ease of parking, amount of head- and legroom, and rally-car performance. Not to mention their unsurpassed capactiy for modification. McDowell, who currently has three MINIs parked in his driveway, says it best: "A lot of Americans really think of a MINI as their canvas."

The Next 50 Years
BMW execs aim to further those feelings with a MINI crossover set for production in a couple years. But the MINI E prototypes leased for $850/month by 450 drivers in California, New Jersey and New York, have received mixed responses. The plug-in, all-electric two-seaters have upheld their promise of 100-mile-plus ranges and 95-mph top speeds, but the charge times for the lithium-ion batteries are longer than expected (20-plus hours in some cases), and the regenerative braking is halting at best; in short, the cars don't feel the same to drive as the spry conventional Coopers.

The company says it knew that not every aspect of the testing would go smoothly--that's the point of having a field trial. And defenders of the project applaud BMW for taking a chance with electric-powered vehicles, even if they haven't quite perfected them yet.

If BMW can capture the spunk and character that have endeared the cars to 1.5 million neo owners like House and his wife, Jane, they won't have a problem. The Portland, Ore., couple owns two classics in addition to the new MINI, which House says quite lives up to its predecessors: "It just puts a grin on your face that you can't wipe off."